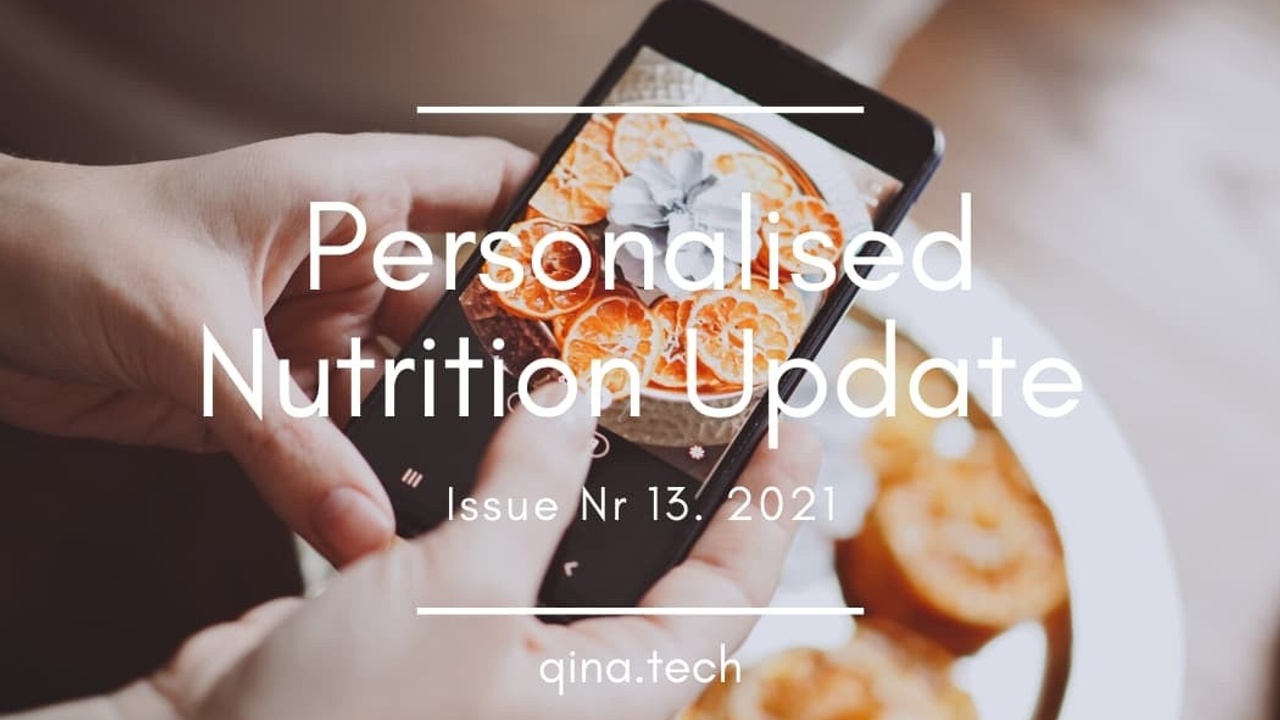 It's finally warmer weather which certainly helps as we are preparing for the upcoming events, the Nutraingredients award, and of course the soon-to-be revealed V2 of the Qina platform. If you have not booked a demo yet, you can do it here

In this week's newsletter: Hologram launches its first brand, latest research, MyMenu goes live with personalized dining, Mudho partners with King's College, Upcoming book launch on the Gut-Immune connection by Dr. Emeran Mayer as well as our participation in the Global health summit on Food as medicine. 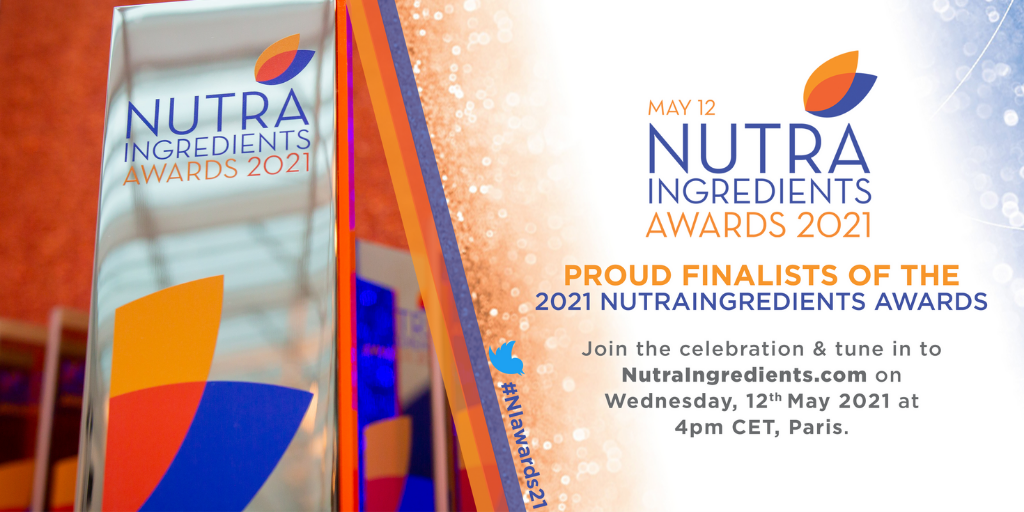 The NutraIngredients awards show will be broadcast live on 12th May, don't miss it! we have been shortlisted! For more details, click here.

In the Headlines- Hologram launches its first immune-boosting brand d.velop

Hologram sciences, the latest of DSM's investment as a closed ecosystem has just launched its first immune-health brand called d.velop which consists of a fast-absorbing vitamin D supplement, an app, and digital support by dietitians. To read the full press release, click here.

The article examines the associations among diet quality, the gut microbiota, microRNAs (miRNAs), and risks of mild cognitive impairment (MCI) in the middle-aged and elderly Chinese population. [Through comprehensive cognitive tests and dietary surveys, outcomes conclude that] a better diet quality is associated with a lower risk of MCI, which may be mediated by the microbiota composition and miRNA expression. These findings suggest that diet, the gut microbiota, and miRNAs may serve as a combinatorial biomarker to identify MCI patients and provide new insight for the diagnosis and prevention of MCI.

Polymorphisms in SLC44A1 are associated with cognitive improvement in children diagnosed with fetal alcohol spectrum disorder: an exploratory study of oral choline supplementation

“[The article reports that] genetic polymorphisms affecting choline utilization are associated with cognitive improvement following choline intervention in individuals diagnosed with fetal alcohol spectrum disorder (FASD). [Through the study] 52 children ages 2-5 years old from the United States who are diagnosed with FASD.
14 to 16 SNPs within the cellular choline transporter gene solute carrier family 44 member 1 (SLC44A1) were significantly associated with performance in an elicited imitation sequential memory task, wherein the effect alleles were associated with the greatest pre-/post intervention improvement. The data potentially supports the use of choline supplements to improve cognitive function in individuals diagnosed with FASD who carry these alleles. Although these findings require replication in both retrospective and prospective confirmatory trials, they emphasize the need to incorporate similar genetic analyses of choline-related polymorphisms in other FASD-choline trials, and to test for similar associations within the general FASD population.”

Trimethylamine N-oxide variation in humans: the product of a diet–microbiota interaction?

"[The article] investigates the associations of serum trimethylamine N-oxide (TMAO) and its precursors with diet, CVD, and gut microbiota in the Hispanic Community Health Study. Through a 24-h recall, intakes of red meat, fish, and eggs were positively and significantly associated with serum TMAO levels independent of other foods.

Red meat intake was positively associated with carnitine, whereas consumption of eggs was positively associated with choline and betaine; fish was not associated with any TMAO precursor. [From an intestinal microbiota data], diet–microbe interactions found that TMAO was elevated only in red meat consumers who had a high abundance of any of these 4 Clostridiales species [while] these bacteria in eggs and fish lacked genes necessary for converting choline to TMA. [The findings from the study] highlight that not all paths to TMAO are equal, which has potential implications for the role that TMAO plays in CVD etiology."

Associations between dietary patterns and the incidence of total and fatal cardiovascular disease and all-cause mortality in 116,806 individuals from the UK Biobank: a prospective cohort study

“Gastrointestinal symptoms and gut dysbiosis may occur before the onset of motor symptoms in Parkinson's disease (PD). Environmental toxins and gut dysbiosis may trigger oxidative stress and mucosal inflammation, and initiate α-synuclein accumulation in the enteric nervous system, early in PD. Chronic gut inflammation can lead to a leaky gut and systemic inflammation, neuroinflammation, and neurodegeneration via gut-vagus-brain signaling or through blood-brain barrier permeability. The gut microbiota interacts with the human body by modulating the enteric and central nervous systems, and immune activity. As changes in gut microbiota composition might be associated with different clinical phenotypes of PD, gut microbiota-modulating interventions, such as probiotics and fecal microbiota transplantation, have the potential to restore gut dysbiosis, reduce inflammation, and possibly modulate the clinical PD phenotype.”

How medical AI devices are evaluated: limitations and recommendations from an analysis of FDA approvals

“A comprehensive overview of medical AI devices approved by the US Food and Drug Administration sheds new light on limitations of the evaluation process that can mask vulnerabilities of devices when they are deployed on patients.”

MyMenu Concierge: Good for Your Restaurant, Good for Guests, Good for the Planet

Healthy Dining is a health technology company that promotes transparency of information such as nutrients, allergens, ingredients, and claim validations in the restaurant industry. The company invites restaurants to sign up and be featured in its platform, MyMenu Concierge, for free. “MyMenu Concierge empowers consumers to find restaurants offering menu items aligned with Healthy Dining’s personal health goals and lifestyle values.” The users can personalize their preferences ranging from nutrition information, eating lifestyles, food preferences, and sustainability.

“Oxford University and Prenetics collaborate to decentralize laboratory testing with rapid, highly accurate, molecular testing for all infectious diseases. A new Prenetics Innovation Technology Centre for Advanced Molecular Diagnostics has been established in OSCAR which is Oxford University’s first overseas centre for research in physical and engineering sciences. The Prenetics ITC will bring together leading researchers in bio-sensing, clinical virology, microbiology, and medical devices in efforts to enrich technology development for molecular diagnostics. [Its first OxLAMPTM RaViD Direct SARS-CoV-2 product has been developed with awaiting submission to the FDA as it is capable of testing for COVID-19 in 20 minutes with 96% accuracy.]”

“Edifice aims to harness previously unattainable insights into the root causes of chronic diseases of aging, followed by delivering highly personalized interventions to improve inflammatory and immune health and extend healthspan. To date, the lack of measurable biomarkers to detect the root cause of these non-communicable diseases has been the main barrier to quickly prevent, diagnose and treat which impacts the health span of afflicted people. The company combines proteomic approaches with artificial intelligence and predictive analysis to measure the rate at which an individual's body ages. Edifice has created the first-ever metric to measure systemic chronic inflammation that is a predictor of multiple chronic diseases of aging. Furthermore, the company has identified interventional supplements that target an individual's immunotype to improve inflammatory health and facilitate healthy aging.”

“[Muhdo’s collaboration with King’s College London] aims to develop the next generation of consumer epigenetics testing integrated with other biomarkers of lifestyle and environmental data through AI and advanced data analytics. In particular, Svitlana Surodina, who is ARK’s new Entrepreneur in Residence and researcher in the Department of Informatics at King’s, will be developing novel technologies for integration with Muhdo’s platform. [The hope is to use artificial intelligence to further apply epigenetics, health and lifestyle data to consumers and research for longevity.]”

“Researchers during a recent study developed a new mathematical model for the interaction of bacteria in the gut.  This could help in designing new probiotics and specially tailored diets for preventing diseases. The paper describes how the mathematical model performed when making predictions relating to two earlier clinical studies.”

Join us for the upcoming not-to-be-missed Personalised nutrition Summit where we are speaking and judging!

Adam Kensley, Head of New Product Development at Quorn Foods, emphasizes that the meat-free industry has grown exponentially and the industry has a 30% year-on-year increase in the United Kingdom. To continue the expansion of this market, Kensley suggests developing meat alternatives that recognize regional food preferences in order to target common foods of different populations. Quorn has been looking at other protein options such as pea to develop the new textures. Furthermore, the company is looking into mimicking whole meat cuts and extending the shelf life of its products.

The article reviews the trends of how the health industry is expanding and becoming more affordable. There has been an increase in sales in “anti-inflammatory beverages like green tea and vitamin C-rich beverages like cranberry and orange juice, as well as gut-boosting fermented foods like yogurt and kefir.” Comfort is a driven factor in purchasing with milk and cereal becoming popular once again. Snacking is the trending eating habit as consumers are moving away from the traditional three meals a day.

“Sports and active nutrition: Unlocking potential and performance, will talk about the industry changes affected by the pandemic and what the brands are doing to connect with consumers.”

Guest speakers include Nick Morgan (director of Sports Integrated), Dom Day (cofounder of FourFive), and Ahmed El-Sohemy (professor and research chair in nutrigenomics at the University of Toronto) to discuss the evolving industry of sports nutrition, the role of personalized nutrition and consumer interests.

In this new book out in a couple of months, Dr Emeran Mayer, MD explains the scientific underpinnings of good and bad stress, what shapes the development of the stress response, and how bad stress compromises wellness and leads to chronic disease.”

Food as medicine: Understanding the power of food & possible impact on future of food healthcare - 26th-27th May