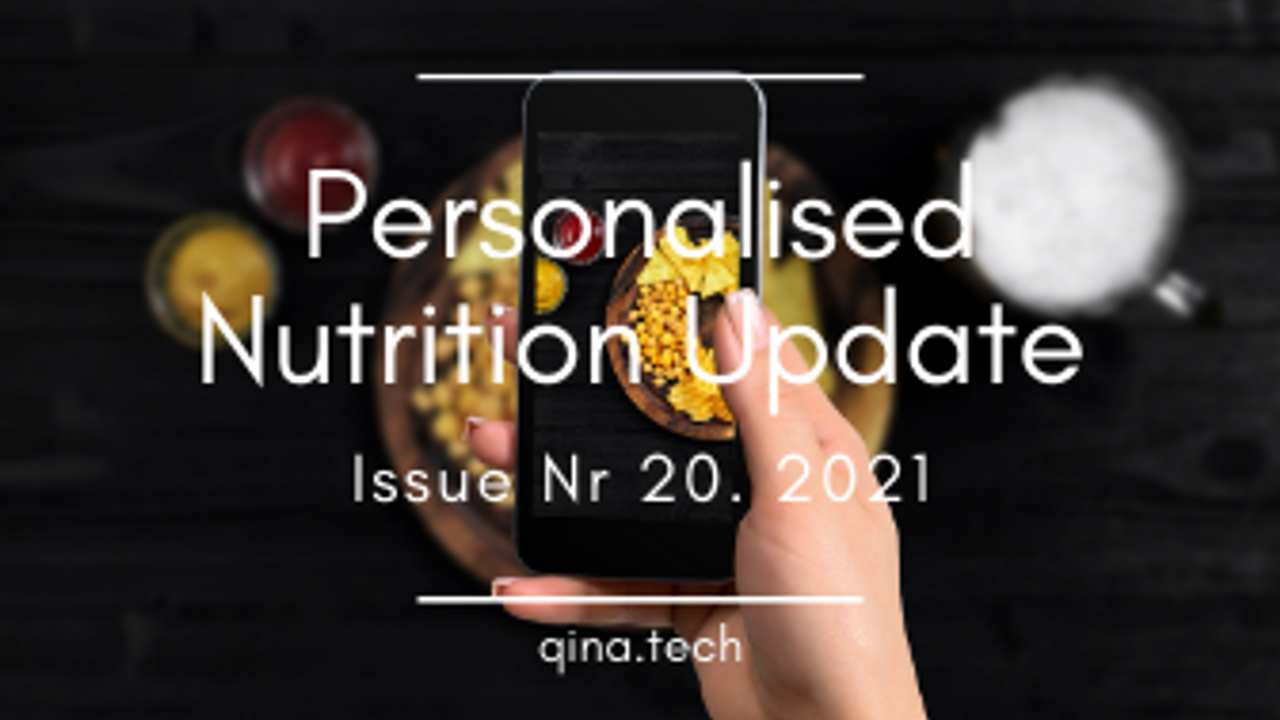 I am off to have my second jab today and relieved that it will be over (for now at least). We are gearing up for the upcoming Personalized nutrition summit and super busy with V2 of the Qina platform. We have some very exciting announcements coming soon!

We have just published our latest executive data brief on Trends in the microbiome. We cover the recent science, trends, innovations, and gaps. You can read our short blog here.

The monthly briefs are available to Qina platform subscribers only.

“Obesity was first included in the International Classification of Diseases in 1948. Hardly anyone took notice. The misconception that obesity is a lifestyle choice, that can be reversed simply by exercising willpower, has become cemented in the minds of the general public and much of the medical profession. But over the past 25 years or so, most particularly the last decade, momentum has been steadily building towards an acknowledgement that obesity is not merely a risk factor for illnesses such as type 2 diabetes, it is a disease in its own right”.

This study aimed to "evaluate the effects on plasma TMAO of diets based on foods rich in polyphenols (PP) and/or long-chain n–3 fatty acids (LCn3) or whole-grain cereals (WGCs), in individuals at high cardiometabolic risk". The results show: "(...) TMAO concentrations directly correlated with LCn3, EPA (20:5n–3), and protein intake, but not SFAs, fiber, MUFAs, and PP intake. Among food groups, TMAO directly correlated with the intake of fish, vegetables, and whole-grain products, but not meat, processed meat, and dairy products." In conclusion: "[TMAO] it is not a universally valid biomarker of cardiometabolic risk independent of the background diet".

Duration and Content-Type of Smartphone Use in Relation to Diet and Adiposity in 53,133 Adolescents

Why has Japan become the world’s most long-lived country: insights from a food and nutrition perspective

In 1960, life expectancy in Japan was the shortest among the G7 countries, but nowadays, it is the longest, primarily due to remarkably low mortality rates from ischemic heart disease and cancer (particularly breast and prostate) and the decrease in cerebrovascular disease—particularly intracerebral hemorrhage—and stomach cancer. “Low obesity, low intake of saturated fatty acids, and high intakes of marine n-3 polyunsaturated fatty acids, plant foods such as soybeans and non-sugar-sweetened beverages such as green tea may contribute to low cancer and ischemic heart disease mortality. In the past, cerebrovascular disease and stomach cancer mortality rates were extremely high, probably due to a relatively high salt intake and low intake of saturated fatty acids and calcium.”

This review "carried out a Systematic Literature Review (SLR) to provide an overview of where and how machine learning has been used in Precision Nutrition from various aspects, what such machine learning models use as input features, what the availability status of the data used in the literature is, and how the models are evaluated". The results show: "fifteen problems spread across seven domains of nutrition and health are present. Four machine learning tasks are seen in the form of regression, classification, recommendation, and clustering, with most of these utilizing a supervised approach. In total, 30 algorithms were used, with 19 appearing more than once. Models were through the use of four groups of approaches and 23 evaluation metrics. Personalized approaches are promising to reduce the burden of these current problems in nutrition research, and the current review shows Machine Learning can be incorporated into Precision Nutrition research with high performance".

"The most commonly used omics databases are a compilation of results from primarily male-only and sex-agnostic studies (...) [this review] aims to bring attention to the innate bias of omics resources and provide recommendations for addressing this limitation".

A global metagenomic map of urban microbiomes and antimicrobial resistance

This article presents the first systematic, worldwide catalog of the urban microbial ecosystem. "This atlas provides an annotated, geospatial profile of microbial strains, functional characteristics, antimicrobial resistance (AMR) markers, and genetic elements, including 10,928 viruses, 1,302 bacteria, 2 archaea, and 838,532 CRISPR arrays not found in reference databases. [also], identified 4,246 known species of urban microorganisms and a consistent set of 31 species found in 97% of samples that were distinct from human commensal organisms". Other results showed that "profiles of AMR genes varied widely in type and density across cities. Cities showed distinct microbial taxonomic signatures that were driven by climate and geographic differences".

"Founded in 2015, Lykon is Germany’s market leader for personalized nutrition concepts based on certified blood and DNA tests. Supported by machine learning and artificial intelligence, Lykon provides users with customized nutritional recommendations, recipes, products and guidance for better health". Nowadays, "Lykon has raised €6.4 million in its Pre-Series A funding round (...) In addition to the fresh funds, Lykon has acquired Gaia Nutrition, one of the technology leaders for personalized nutrition plans."

Professional footballers Mathieu Flamini and Mesut Özil have joined forces with the University of Westminster to launch a new range of health supplements: the U ULTRA. "The new supplements line was developed at Westminster’s recently opened Centre for Nutraceuticals, and consists of four full-spectrum power blends, including Energy Sport Pro, to achieve peak performance, Immunity, to always feel your best, Mind, to perform under pressure and Recovery, to recover faster. (...)The athletes teamed up with The Felix Project and will donate two healthy meals to school children in need for every supplement sold."

"Vitaflo International, part of Nestlé Health Science, is expanding its offerings for specialized nutrition with the acquisition of certain Dr. Schär products and its manufacturing facility in Rosbach, Germany. The acquired brands, Mevalia and ComidaMed address the dietary management of Inborn Errors of Metabolism (IEM) and cow’s milk protein allergy. Mevalia is a protein supplement brand for consumers with phenylketonuria (PKU), whereas ComidaMed offers hypoallergenic powdered mixtures, which can also address IEM".

Did you know that "women spend more time in ill health than men, are more likely to lack digital skills and yet are more likely to access digital healthcare services?". Following a recent roundtable on FemTech, Jenny Thomas, programme director at DigitalHealth.London explores how it can help shape women’s health strategy. "Increased education and awareness of the opportunities of FemTech. I am doing my best to champion these opportunities where I can, for example through working with FemTech Insider on FemTech TV, a series of interviews talking about innovation in women’s health. Organisations like Women of Wearables (WoW) are also working to inspire and connect people in this space – I recently wrote a blog for WoW on how FemTech can help the NHS. There are so many tools and channels we can use to increase awareness of FemTech – let’s use them! (..)This includes both Government grants and venture capital. We know 80% of FemTech founders are women and yet less than 2% of all venture capital is invested in women-led companies (Pitchbook, 2021)."

Join us for the upcoming not-to be missed Personalised nutrition Summit where we are speaking and judging! 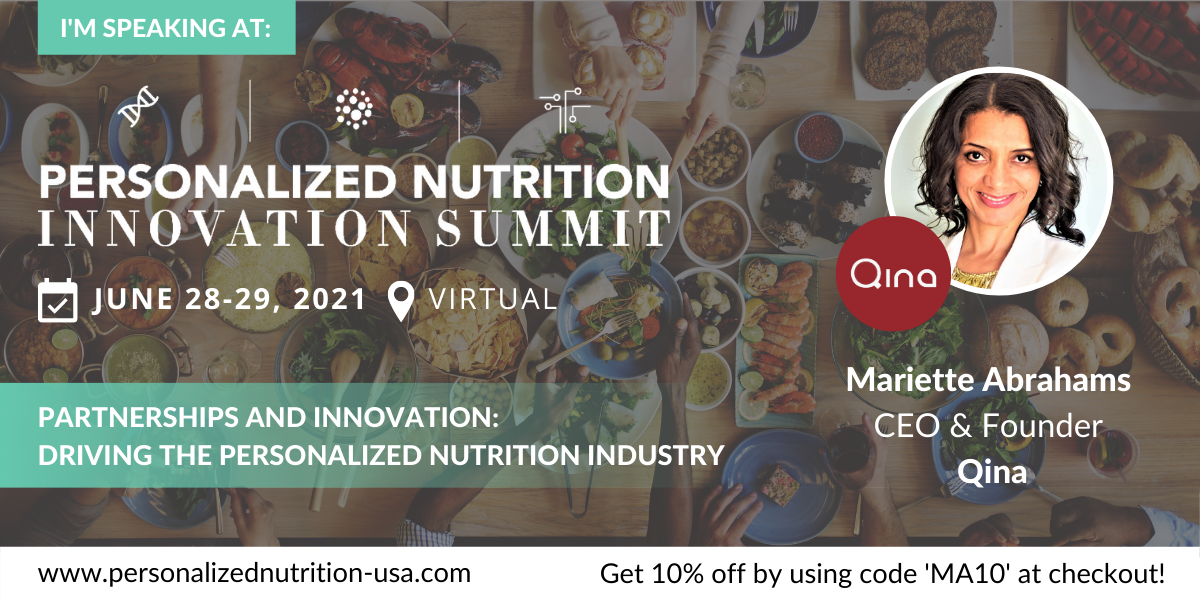 The research conducted on 2,007 US consumers in May by prebiotic fiber brand Benefiber, revealed that 52 percent of US consumers have experienced an increase in digestive problems in the past year, which brings us to the question if COVID-19 is responsible for that. The survey data showed that nearly two in three of US consumers say that finding a balance has been challenging over the past year, with roughly half revealing that their physical health (52 percent) and mental health (48 percent) has decreased since March 2020, and so gut health can experience negative effects. “As people readjust to their normal routines, it can take time for their gut to catch up. Increased stress and activities, such as traveling across time zones and dining out after a prolonged absence, disrupt the gut’s comfort as much as your own,” says Emma Venditti, Benefiber’s brand manager. "The survey also delved into current attitudes on gut health, revealing that 71 percent of respondents believe a balanced and healthy gut can help maintain general health and well-being. However, 49 percent are not proactive in managing their digestive health. Notably, consumer confusion in this space reinforces the need for additional education about improving gut health. Nearly 60 percent of US Americans reported they are more familiar with probiotics than prebiotics, with one-third believing prebiotics are the same as probiotics. Furthermore, even though 62 percent of those surveyed believe incorporating a prebiotic fiber supplement can help contribute to overall gut health, only 20 percent have taken a prebiotic within the last year".

Gousto is a UK meal box provider that will incorporate in their labeling, the carbon footprint, to help consumers make more environmentally conscious dinner choices. This label will benefit Gousto, after research carried out by environmental services company Foodsteps found out that the recipe box firm produces 23% fewer carbon emissions than the equivalent meals from conventional supermarkets. According to the research, [the secret] is a short supply chain and reduced food waste, which contributes to each Gousto order saving 7kg of carbon dioxide (CO2e) emissions compared to the equivalent supermarket shop.

Google search trends: Consumers on the search for prebiotics

Research performed by Lumina shows that the term "prebiotics" appears in a monthly average of 11,5K in google searchings, between Feb 2020 and Feb 2021, more than other microbiome terms like "cardiovascular health", "digestion" and even "immunity". More specifically, "FOS and GOS have enjoyed strong growth, particularly since the start of 2021". The reason for this is the global trend for plant-based eating: "this shift opens up opportunities for prebiotic fibers, since they are either already present or can easily be integrated into the plant-based products that are substituting animal-based foods".