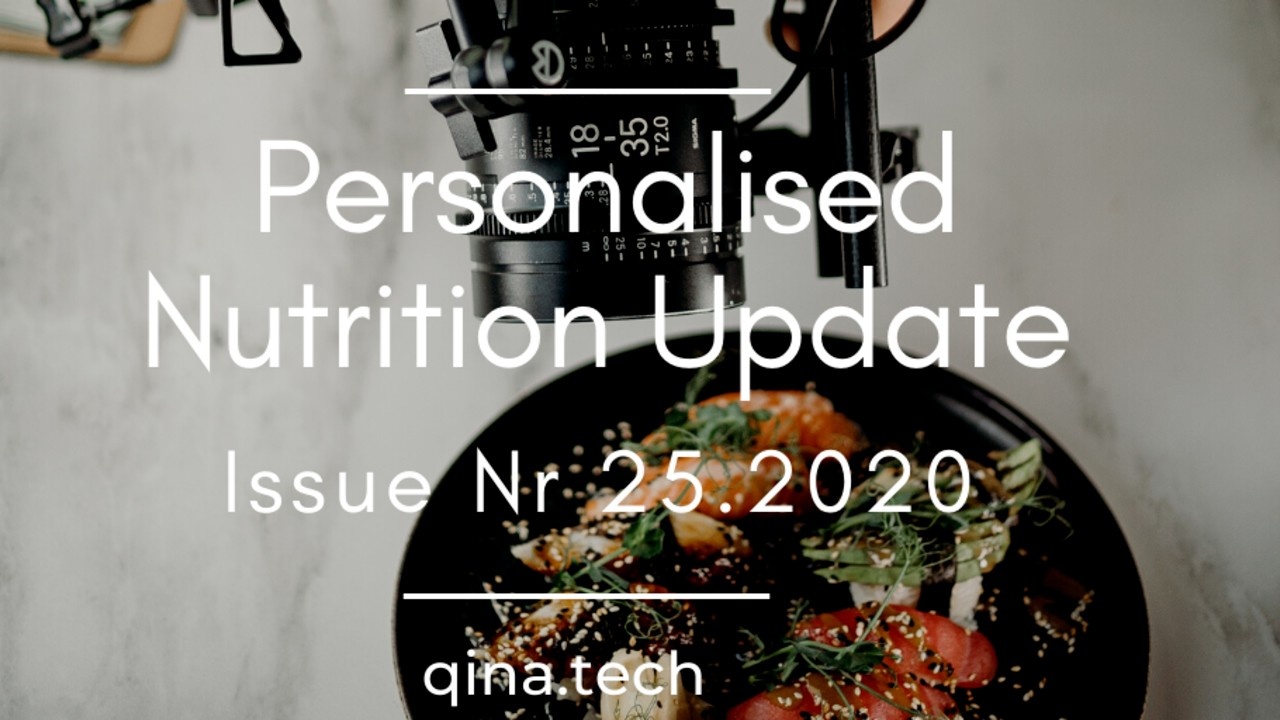 Sep 21, 2020 11:00pm
Personalized Nutrition Update issue nr. 25/20
As temperatures start dropping and COVID cases start rising, we are ready to brace ourselves to adapt yet again. It is critical that we stay positive and hopeful. The Personalized nutrition industry certainly shows no sign of slowing down at this time, and I am super excited that the Nutraingredients sport summit starts today! I will be featuring in the intro session, do tune in.
In this week's newsletter: Consumer perception on sharing DNA and health data, the latest research on personalized approaches, new PN Russian metabolite startup, Apple goes big in Singapore, the rapid growth of home fitness apps, and upcoming events.

This recently published paper summarizes the finding of a large public survey on the willingness to share their genomic data.
Just over 32K individuals in 22 countries were surveyed which showed that awareness and knowledge of the concept of DNA, genetics, and genomics is low. Genetic information was not uniformly seen as different from other forms of health information, but there was an association between seeing genetic information as special in some way compared to other health data and increased willingness to donate. The authors conclude that it "highlights that the research community not only needs to be worthy of trust by the public, but also urgent steps need to be taken to authentically communicate why genomic research is necessary and how data donation, and subsequent sharing, is integral to this". To read the full paper click here

Evaluation of Food-Intake Behavior in a Healthy Population: Personalized vs. One-Size-Fits-All

In this recent study conducted by TNO, participants were randomized to 3 groups: Control, Generic nutrition advice, and Personalised nutrition advice (PNA). The PNA group received automatically generated dietary advice based on anthropometry, metabolic health parameters, dietary intake, age and gender, and goal-setting for one or more food categories were also incorporated. The finding demonstrated that the PNA group showed the greatest improvement in nutrition behavior in comparison to generic or no advice, and this improvement was enhanced when goal setting per food category was included.

In this Dutch study, the effect and acceptance of an algorithm-generated personalized dietary advice (PDA) for increasing fiber intake was investigated with general advice (GA)as the control. The findings indicate that the algorithm-generated PDA was well accepted and stimulated adherence to the recommendations more than GA.

"During the lifetime of an individual, it is exposed to challenges such as unhealthy diet, medications, and infections." These events can lead to dysbiosis if the gut microbiome doesn't have the capacity of returning to its baseline. This is called gut resilience. This study is aimed to "review the concept of resilience, what is known about the characteristics of a resilient microbiota, and how to assess microbiota resilience experimentally using a model of high-fat diet challenge in humans." This review discusses "interventions to maintain microbiota resilience that can be guided by the knowledge of microbial species or what functions are perturbed by challenges, and designed to replace diminished species with probiotics, when available, or boost them with prebiotics. Fibers with multiple structures and composition can also be used to increase microbiota diversity, a characteristic of the microbiota that may be associated with resilience".

Get a peek into big data microbiome trends

This article aimed to analyze the "16S rRNA gene sequencing and metatranscriptome to investigate the gut microbiome characteristics of a group of COVID-19 patients over the course of a probiotics-assisted therapy". The results showed "COVID-19 patients exhibited apparent microbiota alterations characterized by prominent compositional and functional shifts, which included taxonomic changes (e.g., increased relative abundance of Enterococcus and Rhodococcus, and decreased relative abundance of Faecalibacterium and Clostridium XlVa) and transcriptional changes (e.g., increased transcriptional activities of Escherichia coli and Klebsiella pneumoniae, virulence factors, and antibiotic resistance genes, and decreased activities of Faecalibacterium prausnitzii)". Individual factors were considered but "coincided with the resolution of respiratory symptoms, after the therapy some patients showed signs of recovery in the gut microbiome abnormalities". In conclusion, the authors reported that: "there is a lack of gut microbiota stability in COVID-19 patients and that measures are needed to ameliorate the gut microbiome perturbations in the patients to improve the prognosis. In addition, the inclusion of probiotics is safe for treating COVID-19 patients and may improve their prognosis".

Food and Nutrition Research to Transform the Future

This Indian study aimed to:

This Italian study analyzed the accuracy of nutrient intake calculations from the nutrition apps FatSecret, Lifesum, MyFitnessPal, Yazio, and Melarossa (apps that fits on the selection criteria of "more than 4-star ratings, more than 1 million downloads, including a food composition database and in the Italian language"). The apps were used for two weeks each, and using "a 3-day food diary (3-DFD), the nutritional values obtained from each App were compared to a Reference Method (RM) including the Food Composition Database for Epidemiological Studies in Italy (BDA). Energy intake differences were calculated for single nutrient and 3-DFD between single App and RM after food-item matching". The results showed that "the Apps tended to underestimate total energy intake compared to the RM, from a minimum of -2.0 kcal for Lifesum, to a maximum of -5.4 kcal for Yazio (average per item). Apps tended to underestimate lipids, and to a less extent carbohydrate and fiber intake, except for Yazio and Lifesum that overestimated protein intake. These discrepancies seem to be due to the use of no country-specific food composition databases and to user customization of the food list". We can conclude that the most used nutrition apps present critical issues in assessing energy and nutrient intake.

The Russian app, Otri, uses artificial intelligence (AI) to do dietary recommendations, based on blood tests and user physical activity. The biggest difference to other similar apps is that the Otri app is only an assistant, and the biochemist makes the final nutritional personalized recommendations. According to Otri: "The system allows you to order delivery of blood tests with a visit to your home, based on the test results and their comparison with data on a person’s physical activity, the doctor gives an opinion and personal recommendations on nutrition and the formation of habits. Artificial intelligence helps Otri doctors: the neural network is trained to recognize the test results and form recommendations on their basis, similar to those given by doctors, while the final conclusion is confirmed and signed by a biochemist.”

Apple and Singapore's government are cooperating to provide citizens with LumiHealth app. This initiative is the first of its kind anywhere in the world and Apple is confident that this partnership will extend to other countries. Singapore is known for betting in health technology and "has one of the highest GDPs in the world, one of the fastest Internet connections and one of the highest life expectancies", and so what "all users need to do is use an Apple Watch and download the LumiHealth app, which is currently available for pre-order. The program will go live in late-October." Singapore's government rewards the participants of LumiHealth that add physical activity data, with "$380 (approximately Dh1,025) that they can spend in various establishments, including food and health shops".

AI may detect CVD with the help of gut microbiome bacteria

What if cardiovascular disease (CVD) could be detected by gut microbiome data? This is what the research "Machine Learning Strategy for Gut Microbiome-Based Diagnostic Screening of Cardiovascular Disease'' released by American Heart Association Hypertension Scientific Sessions, tries to answer. By the creation of a machine learning model, the researchers “utilized 16S rRNA readings from stool samples taken for the American Gut Project and identified 478 participants with CVD and 473 without. Researchers evaluated the diagnostic efficacy of a machine learning model using five algorithms that included random forest, support vector machine with radial kernel, decision tree, elastic net, and neural networks". The results have shown that "(...) the machine learning model differentiated 39 bacterial taxa among participants with and without CVD. Utilizing these differential taxonomic features, the AI achieved an area under the receiver operating characteristics curve of approximately 0.58". Using more calculations, the final "AUC increased to approximately 0.7." They concluded "despite the fact that gut microbiomes are highly variable among individuals, we were surprised by the promising level of accuracy obtained from these preliminary results, which indicate fecal microbiota composition could potentially serve as a convenient diagnostic screening method for CVD (...) It is conceivable that one day, maybe without even assessing detailed cardiovascular function, clinicians could analyze the gut microbiome of patients’ stool samples with an artificial machine learning method to screen patients for heart and vascular diseases.”

Brightseed aims to identify the presence of specific nutrients in plants that are believed to boost human health. It has raised $27 million in its latest round of funding. This finance will be used to complete clinical studies to prove the benefits of phytonutrients. "Using the company’s machine learning platform called “Forager,” Brightseed can identify the presence of phytonutrients in species of plants. Those plants can then be cultivated or their compounds manufactured to produce ingredients for consumer foods". This can add value to society, Flatt (CEO) pointed out quoting a Geisinger study that included pre-diabetic patients: “With patients that spent $200 on whole foods… they saw a 40 percent reduction in their A1c levels [and] that’s more than double what the existing class drugs can achieve (...) From an economic perspective, they reduced the cost of healthcare by 80% thanks to lower hospitalizations and insulin use.” The company’s first product is a phytonutrient compound believed to be beneficial to metabolic health and to manage fatty liver disease.

The Growth of Home Fitness Apps

This report of MoEngage (China not included), shows the data behind the growth of home fitness apps:
In terms of financial ranking, in April and May people "focused on mindfulness and meditation more than active workouts”, so apps like Calm, Headspace, MyFitness Pal, and Strava were the big winners. In June, people had shifted their focus to diet tracking and active workouts and MyFitnessPal took first place, at $6.7 million.
You may also be interested in this new sensor that can measure glucose in sweat

The study "Piloting Citizen Science Methods to Measure Perceptions of Carbon Footprint and Energy Content of Food", discovered a lack of understanding among the general public about the carbon footprint of foods and calorie content. "In the research, 500 people were shown a series of images in random order (...) in one of three different portion sizes (small, medium, large). They were then asked to estimate the carbon footprint, calories, and weight of the foods (...)". The results showed that "most participants overestimated the carbon footprints of the food they were shown (75%), with fewer underestimating (11%) the footprint and 14% correctly guessing the amount. About 60% of people overestimated the energy content (calories) of the foods, with 17% underestimating, and 24% correctly guessing the correct amounts. People could correctly estimate a difference in energy content between small, medium, and large portions of food, they were not able to distinguish a difference in carbon footprint between small and medium portions of food. The fact was, most people were unable to accurately estimate or distinguish between the energy content and carbon footprint of food". This highlights the need for further nutritional education and the need for carbon footprint labeling on food.